Do I Need A Prenuptial Agreement?

You are here: Home / Articles / Do I Need A Prenuptial Agreement? 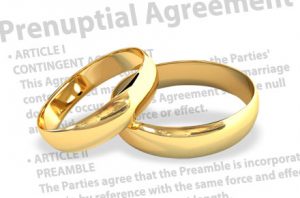 You might think that prenuptial agreements are only for very wealthy people. However, anyone with personal assets, business assets, liabilities, property, inheritance or children from a previous marriage should consider entering into a prenuptial agreement.

Let’s define a prenuptial agreement: It is a legally binding contract created by two people before they marry. The agreement will define such issues as the property brought into the marriage by each person and any property acquired during the marriage and, what the property rights of each will be should they divorce.

Personal & Business Assets Owned Prior to Marriage
If you own any assets or property before your marriage, a prenuptial agreement may be a good idea. It will help preserve you and your spouse’s expectations and prevent surprises in the event of a divorce.

Signing a prenuptial agreement that lists both party’s separate property and the intention that these assets remain separate will ensure that your spouse cannot claim any interest in them if you indeed get divorced.

Although most states recognize that any property owned prior to marriage is separate at divorce, outlining what you owned vs. what your spouse owned before the marriage can be difficult. The prenuptial agreement is helpful in this regard.

Assets & Liabilities Obtained During the Marriage
In many states, any assets and debts accumulated during the marriage will be divided between spouses during a divorce.

However, a spouse could have earned money from a business they started independently or prior to the marriage for which they never intended to share this wealth with their spouse.

Similarly, a spouse could have incurred debt during the marriage for which they don’t want their spouse to be liable. Having a prenuptial agreement that sets forth what assets and debts belong to which spouse, even if obtained during the marriage, can avoid sharing such property/liability in the event the marriage dissolves.

Children from a Previous Marriage or Relationship

You or your spouse might come into the marriage with children, particularly if it is not your first marriage. Although your new spouse may be great with your kids now, you never know what will happen should you get divorced. A proper prenuptial agreement will specify what property and whose property will pass on to your children at divorce. However, provisions in the prenuptial agreement specifying child custody rights and/or child support are not enforced as a matter of public policy. Such issues will be resolved by you and the court at your divorce hearing.

Is a Prenuptial Agreement right for me?

For almost everyone else, though– particularly people in their 30s or older with any substantial assets, inheritance, children, or a former spouse–a prenuptial agreement is a very good idea.

Those entering into a second marriage may find prenuptial agreements particularly useful. One or both spouses may come into the marriage with notable assets, and may want to appropriate family members from the first marriage who should inherit property and assets.

Though it may not be particularly romantic, a well-drafted prenuptial agreement can protect your assets and expectations, and save a great deal of time and money should divorce proceedings ever occur.

If you have questions about prenuptial agreements, the experienced family law attorneys at Charlton & Glover are here to help. Call us at (770) 993-1005 to schedule an initial consultation or fill out our form.

"Charlton & Glover have handled bankruptcy, DUI, divorce, personal injury, and criminal defense cases for me and have done an excellent job" ...